Robert Watson-Watt and the development of radar are to feature in a new exhibition in Brechin Town House Museum. Watson-Watt was, of course, the leader of the team that created the defence system that played such a crucial part in the defence of the U.K. during WWII, particularly in the Battle of Britain.

Making the announcement, a spokesman for The Watson-Watt Society of Brechin referred to the Society’s appreciation of the hard work of museum staff in setting up what is an exceptional display of images, documents and artefacts depicting the war-time defence system.

‘While this may be a relatively small exhibition, which reflects the size of Brechin Town House, it is nevertheless a comprehensive display and museum staff have really excelled themselves in putting it together. We thank them profusely and also those, including the University of Dundee, Angus Council and others, who have contributed the various items displayed.’

Reference was also made to the dramatic progress made by the Society over the last year culminating with contractors starting this week in preparing the ground in St. Ninian’s Square and constructing the plinth for the statue which is currently in storage in Powderhall Foundry, Leith. It is anticipated that the installation work will take no longer than four to five weeks but the Society apologises for any inconvenience caused to nearby residents. 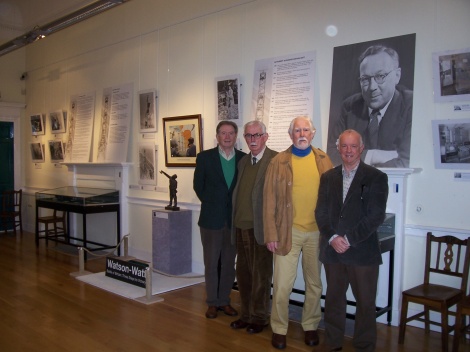 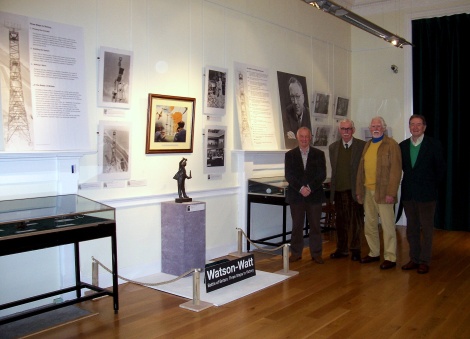 It is expected that the monument will be in place by the beginning of May and while it had been hoped to have it unveiled early that month, the Society is unable to give a specific date for this ceremony but it is now likely to be later in the year, possibly in July.

‘The statue will be in place within the next month or so although the official unveiling has had to be delayed. This is not a consequence of the logistics in the installation of what is Brechin’s first statue but rather the difficulty in making specific arrangements for an appropriate individual to carry out the ceremony to honour the greatest Brechiner of the 20th Century.’

While the statue will be in place it will be without its dedication plaque which will be attached a few days before the unveiling.

The Watson-Watt Exhibition runs from 29 March until 27 May in the Brechin High Street building. The museum is open daily, 10.00 a.m. to 5.00 p.m., Tuesday to Saturday.

We need your HELP to complete our Monument Project

Dig down the back of the sofa, empty your pockets of change. Raid the piggy bank and please donate to us.

Every penny you donate to The Watson-Watt Society of Brechin will be used to realise the projects and events which we currently have under way and in the planning.

All our donations are handled securely through the PayPal online processing website - please visit our Donation page : https://watsonwatt.wordpress.com/donations/

Friends of The Society

Lord Dalhousie, Patron of The Watson-Watt Society of Brechin : We would like to thank our participants, volunteers, sponsors and donors for the huge success we have achieved to date in raising awareness worldwide across a wide range of communities

Robert Alexander Watson-Watt was born in Union Street, Brechin, in 1892. He showed an early interest in science, spending many hours experimenting in the workshop of his father’s joinery business.

He won a scholarship to Brechin High and later to University College, Dundee where he took a degree in Electrical Engineering.

Thank you for visiting our Website. We are very excited about the site and the opportunity to update our visitors and supporters with our latest news and developments.

We invite you to look around our website and familiarise yourself with Sir Robert Watson-Watt and the great achievements made by both him and his team.

On one occasion, late in life, Watson-Watt reportedly was pulled over in Canada for speeding by a radar-gun toting policeman. His remark was, "Had I known what you were going to do with it I would never have invented it!" He wrote an ironic poem ("Rough Justice") afterwards:

Pity Sir Robert Watson-Watt, strange target of this radar plot,
And thus, with others I can mention, the victim of his own invention.

His magical all-seeing eye enabled cloud-bound planes to fly,
but now by some ironic twist,
it spots the speeding motorist and bites, no doubt with legal wit, the hand that once created it